May is – in my opinion – one of the best times of the year to go wandering through a wood. Many of the woodland flowers are showing, such as greater stitchwort, wood anemone, primroses and, if you’re lucky, carpets of native bluebells. Above in the canopy, a keen ear can pick out calls of nuthatches and chiffchaffs whilst in the understory, the songs of blackcaps, dunnocks and wrens echo out. Along rides and in clearings, butterflies like speckled woods flit and battle in the dappled sunlight before resting on a sunny nettle leaf. A woodland in May has many charms, but the best of them has to be the blossoms of hawthorn and the invertebrate fauna which are attracted to it.

This blog is about the creatures you can find on hawthorn in particular, and how you might go about finding some of them yourself. 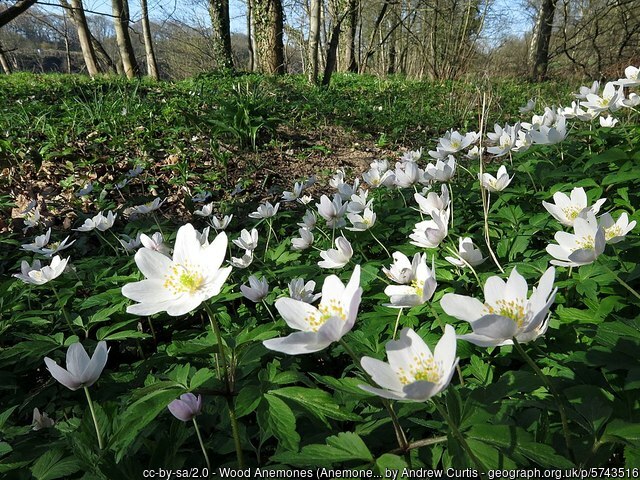 Around this time of year, the hawthorn is beginning to flower on a backdrop of fresh green leaves. Along the sunnier, sheltered side of the wood, down the sides of rides, around the edges of glades and throughout hedgerows, the blossoms steal the show. Entomologists, such as myself, get very excited at this time of the year because of the sheer volume and diversity of invertebrate life that is attracted to hawthorn flowers. Here are a few species that are likely hiding amongst the blossoms.

Misumena vatia is a type of crab spider which can be found hunting for flies on the flowers. The females and males look completely different and are therefore sexually diamorphic. Males are smaller and predominately brown, whereas the females are larger and have a trick up their sleeve: adult females have the ability to change colour between hues of brilliant white to yellow, depending on the flower they are hunting from.

If you stand for a short period of time and watch carefully, you may note several hoverflies darting between the flowers feeding on nectar and pollen. These may be species such as Dasysyrphys albostriatus, Syrphus ribesii and Eristalis pertinax. All resemble bees or wasps, superficially due to their markings, but are completely harmless to humans.

Hawthorn is especially attractive to several groups of beetles. The (barely pronounceable) weevil Neocoenorrhinus aequatus is associated with hawthorn and is usually found nestled within the flowers. Another species, this time a chrysomelid or leaf beetle, Lochmaea crataegi is also predominantly found on hawthorn, a link which is highlighted in the species epithet, with the Latin genus for the plant being Crataegus. 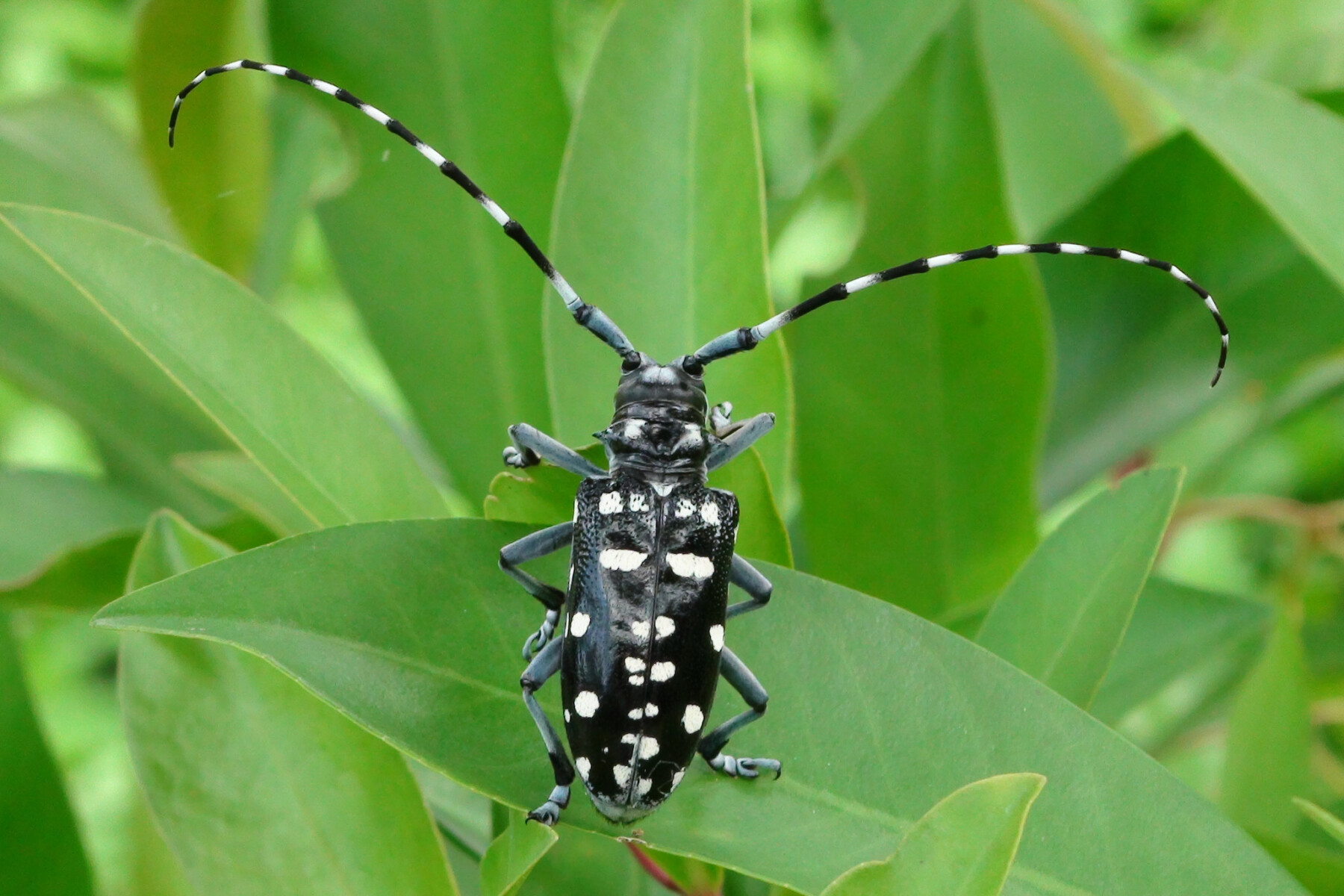 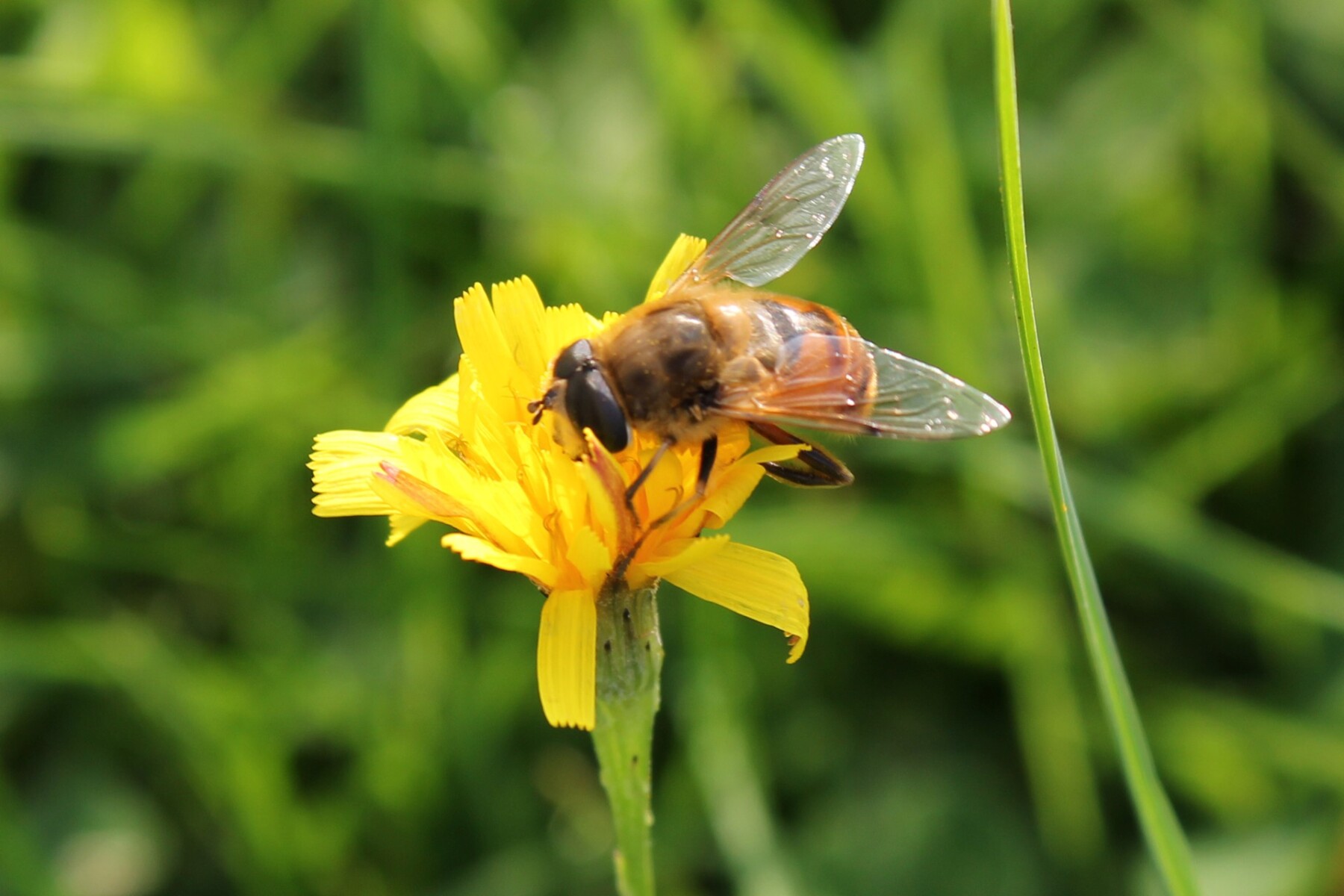 My favourite family of beetles can be found on hawthorn blossom: the Cerambycidae – otherwise known as longhorn beetles. This family of beetle are generally characterised by long antenna, an elongate body shape and a robust appearance. They come in a wide range of sizes, but most are on the larger side for beetles. They can be all one colour, such as red, brown or black, or have a variety of different coloured spots and stripes. In total there are about 70 native species and around 30,000 species have been described worldwide. Approximately 10 or so can be found on hawthorn flowers, depending whereabouts in the country you are and how much luck is on your side, as some species are extremely rare.

A relatively common species is Grammoptera ruficornis. This is a smaller species compared to most, measuring in at around 3-7mm. Sometimes hundreds of them can be spotted along even the smallest of hedgerows, if you look close enough. Anaglyptus mysticus is one of the showiest of all the longhorn beetles. It has a distinctive pattern of hairs which is instantly recognisable. 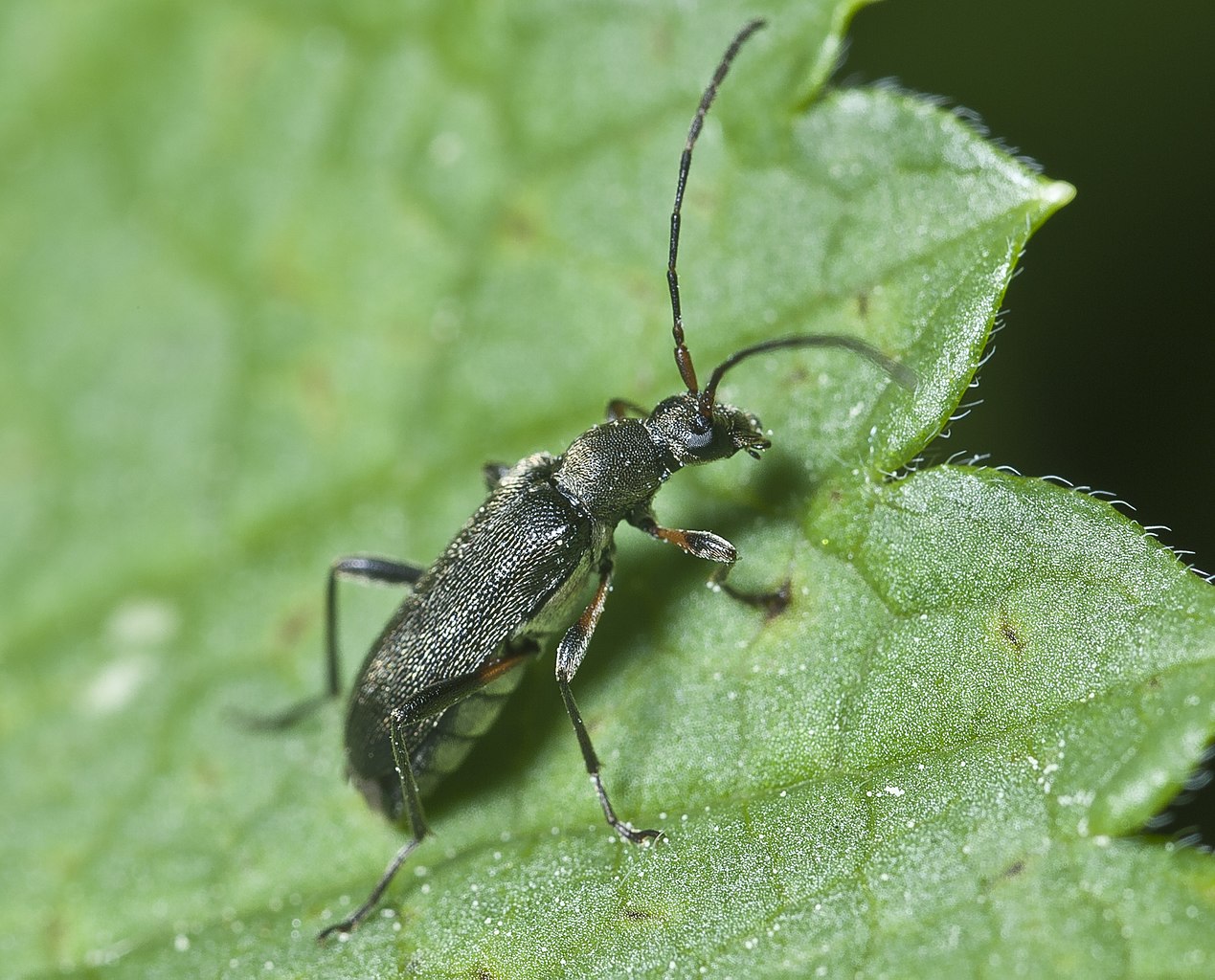 Rhagium mordax is also frequently found on hawthorn. This large species is an exception to the rule of long antennae but from its overall body shape is still recognisable as a longhorn beetle. There are two main approaches to discovering some of these creatures yourself. Firstly, simply by standing near some blossom and just observing what is coming to and from the flowers, though some of the smaller beetles and other invertebrates might be harder to spot. The second approach is why I never leave the house without an umbrella – even in the height of summer! Upturning the umbrella underneath hawthorn blossoms before giving the flowers a gentle tap dislodges many of the invertebrates nestled in the flowers. Species with external wings, such as flies, bees and wasps don’t stick around very long, but the less mobile creatures are deposited on the umbrella. It’s amazing what you can catch in the umbrella, or ‘beating tray’, as we call it in the trade. Once you’ve had a look at what you’ve dislodged, be sure to try to get the contents back onto the blossoms as gently as possible. A white umbrella works best, but a white sheet suspended over a bamboo cane frame (or something similar) would work just as well.

We love to see what you have spotted in nature on your woodland walks. Please do tag us on social media with any photos, or for help identifying any mystery beetles you find in your umbrella!