I’ve been fortunate enough to spend enough time outdoors, in both a professional capacity and in my own time, to have witnessed numerous examples of beauty within the natural world. Of course, beauty is in the eye of the beholder, but as autumn is underway, I think many of us can agree that fungi provides beauty. The benefits of these organisms are slowly being unravelled and unpicked, and their importance to ecosystems and natural processes is sure to only increase. For this edition of the blog, I have picked five of the most extravagant, unusual and bazaar fungi that I have come across in recent years. 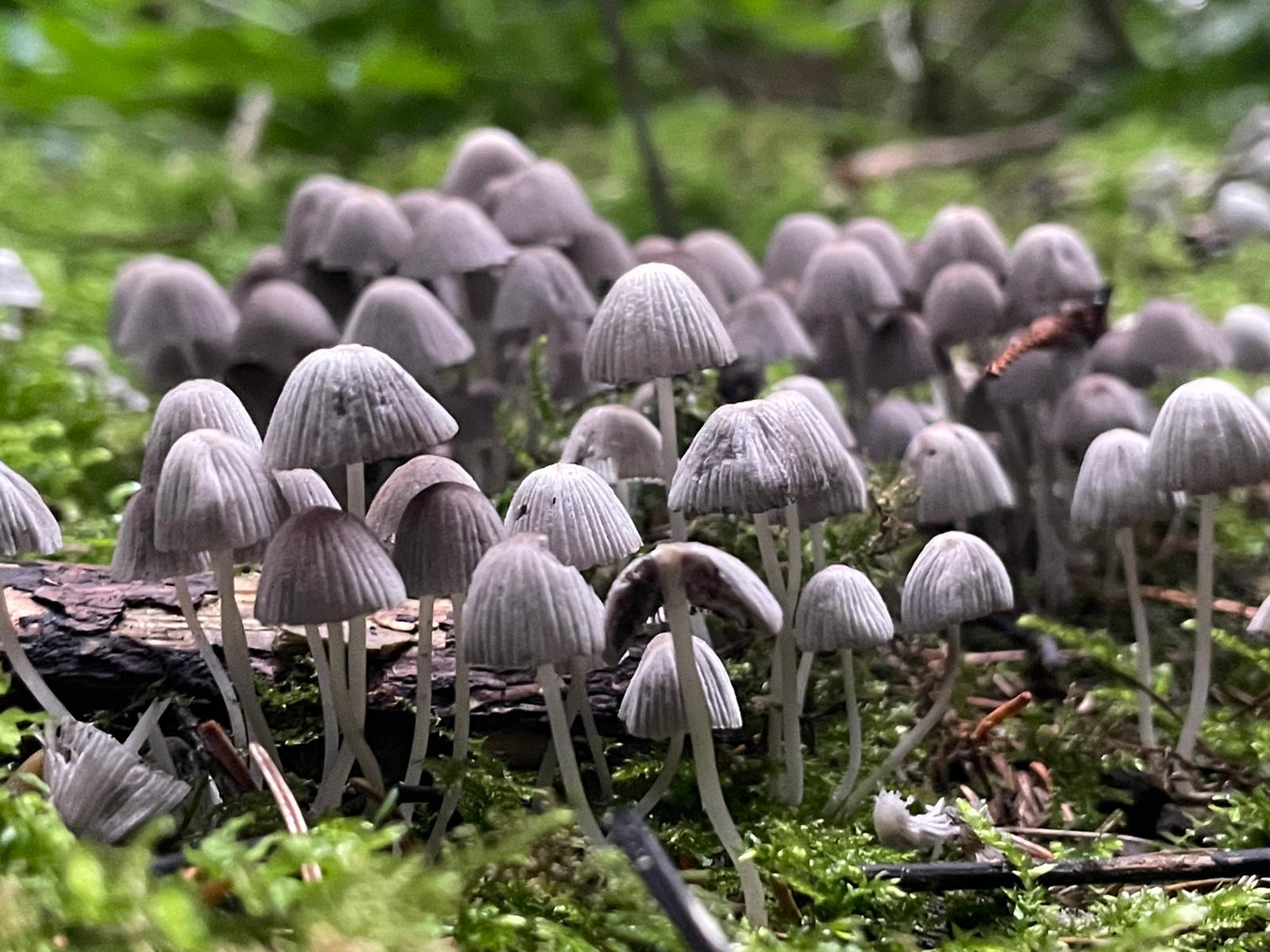 Elms are host to one of the best-named fungi within the UK, the Wrinkled Peach Rhodotus palmatus. It grows on dead and decaying Elms, so one of the best places to look is along hedgerows. I’ve only encountered it a handful of times in the past 10 years, most recently with the Nicholsons Arboriculture team, last year, whilst carrying out the removal of dangerous dead Elms alongside of a well-used footpath.

I’ve also seen it in my home county of Lincolnshire, whilst carrying out forestry work. The same Elm produced a Wrinkled Peach each successive year for 3 years, before the Elm sadly fell over in a period of heavy wind. As its common name suggests, it looks just like a peach on the turn! Pipe club Macrotyphula fistulosa are generally a difficult fungus to spot. If you do find yourself lucky enough to spot one, you are likely rewarded with lots of pipe clubs reaching for the sky. Several times I’ve wondered how I’ve missed them when I return down the same path a few hours later.

To give yourself the best chance of finding them, wander through a woodland with a lot of birch. This fungus is found in the leaf litter and ground layer, although there is a form which you can occasionally find growing from the birch in the canopy. There are a few fungi you can find at any time of the year, one being the Daisy Earthstar Geastrum floriforme, another contender for the best-named fungi in the UK. There are several species of Earthstar in the UK, but this one is the most striking, and rarest.

It has a rather clever way of spore dispersal, something that I like to trigger with any Earthstar I come across by using a bit of water from a drinks bottle. When it rains, the water droplets hit the spore sac, ejecting the spores inside. When it isn’t at its best, the rays around the outside close up over the central part, but pop one in a cup of water and the Daisy Earthstar will open back up! The White Saddle Helvella crispa is an often-overlooked fungus that is ironically most frequently encountered along footpaths. In dim light, I have been guilty of walking right past one, only to see it, as if appearing like a fungal lighthouse, on my return down the same path hours later in full sunlight. It is a common fungus across the UK fruiting in late summer and autumn. The last one on the list is Pseudopithyella minuscula, and its host is the blackened rotting twigs of Leyland. Considering how reasonably common Leyland are, you would think that this fungus would be equally as common, that isn’t the case. To date, there has only been a handful of records.

To best indicate how rare these are, I will refer to a story from when I worked at a Christmas tree yard, in Lincolnshire. Whilst cutting a Leyland, I looked down and saw a brightly coloured, toadstool-looking thing, and being naturally interested in nature, I picked it up and took it home. After posting it to a friend, an established and respected Mycologist, he confirmed it as the second British record of Pseudopithyella minuscula. I hope that with the forthcoming display of fungi within the landscape you have the time to go out and look for the more unusual species aside from the toadstool and bracket fungi. While fungi are fascinating to look at, I would strongly advise against picking and eating your own mushrooms and toadstools. Identification of the 10,000 species is often very difficult and the risks involved are considerable. Enjoying from a distance is the best suggestion I can make!